Finding the Bats in Los Angeles

Ever try to find something that is dark, at night, that flies fast and in anything but a straight line?

I can think of a dozen ways to find them - the way just described does not top the list.

This evening after sunset I went looking for bats. I installed a bit of software on my cell phone called "Physics Toolbox Apps" by Vieyra Software (Disclaimer: I have no ties to these folks, no vested interest, and no contact). It reads data from the sensors built into the phone and presents it (as well as saves data files conveniently in ".csv" format) graphically.

One of its tricks is to process inputs from the microphone and perform what I presume is a Fast Fourier Transform. This takes the signal and transforms it into the frequency-intensity plane (among other things). The result is a picture of the soundscape showing the audio spectrogram over time.

Bats often echolocate with very fast chirps at 18kHz and above. You can see a bunch of fast, faint pulses from a distant bat at the top of this plot, around 22kHz (they are faint and about ten per second, horizontal dashes on the right edge of the picture):

Another species of bat came by at a slightly different time, producing chirps lasting tens of milliseconds every half second or so, with broad intensity between 20kHz and 24kHz (the upper limit is the upper limit of my sensor). These are the horizontal dashes on the right side of this image:

While these may not be National Geographic cover material, they do beat my best photo using visible light of a bat (I cannot find it myself - it was near center of the frame, but likely was moving too fast for this exposure): 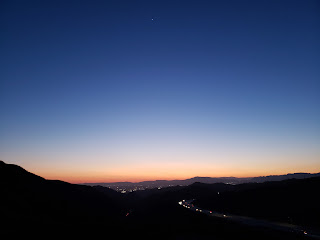 My son was with me when these were taken, and he didn't need the phone spectrogram to find bats - he could hear the chirps and got fairly good at pointing at the bat, which would occasionally become visible when backlit by the twilight sky. "Sometimes one was a clicking sound almost, and the other was like a high-pitched squeak sound".

Edit: Turns out this obvious approach has been used for quite some time and has been reduced to a science. I have no ties to these sites, and find them very helpful.

The USGS has a great document on how to establish workflows to process acoustical data on bats called "A Guide to Processing Bat Acoustic Data for the North American Bat Monitoring Program" at https://pubs.usgs.gov/of/2018/1068/ofr20181068.pdf

If you want to identify the bats to species, there are several online resources