We were in Downtown Los Angeles recently when a sculpture at the intersection of Figueroa and Wilshire suddenly and unexpectedly burst into flames! Thirty seconds later, it was out. Turns out this is a normal if erratic event, the sculpture is named "Prime Matter" by the late Eric Orr. When it feels inclined, the sculpture bursts into flame for about 30 seconds at the top of each hour. Standing at the base of it and looking up gets odd looks from passers-by, at least right until it catches fire... which happens a bit more than 60 seconds into this video we captured. 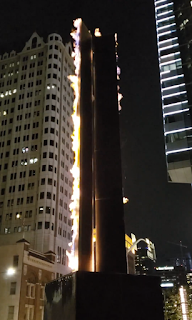 If you happen to be in Downtown and near the corner of Figueroa and Wilshire, it can be worth a short side trip. Our family enjoys it! 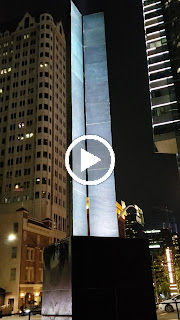 Posted by Rob Ferber at 2:22 PM No comments:

The Antelope Valley is high Mojave Desert. Since it is a desert, it can be easy to have the cold weather and the precipitation happen on different days. This year they happened the same day, Thanksgiving! 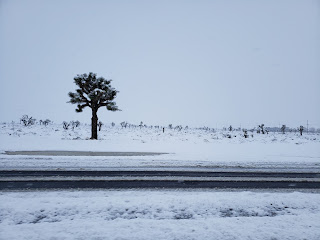 Ever been to the California Poppy Preserve in spring when the wildflowers are going full tilt? This is what the Poppy Preserve looked like yesterday afternoon, under about four inches of fresh snow! 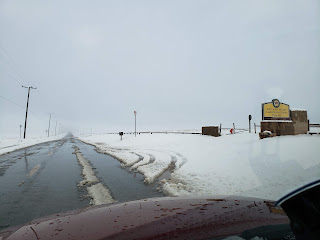 And of course, when it snows, play with snow! 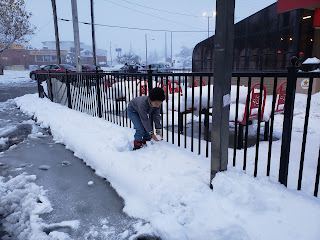 Drive carefully and enjoy the rare (at least for low-altitude parts of California) White Thanksgiving!
Posted by Rob Ferber at 2:10 PM No comments:

Last Apple of the Season and Fall Bounty

Last season we had Apples into January, yet this year the crop is smaller and ripened earlier. This Braeburn is our last home-grown apple of this season, and it was as perfect - it was tart and sweet and crisp. 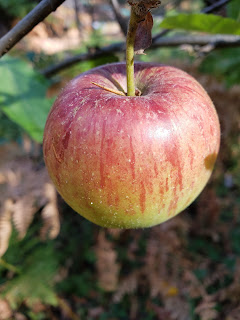 At the same time we picked the last two Yellow Newton Pippin apples. They were as sweet as the one in January, crisp and juicy without being hard - a delightful finale to a short but wonderful harvest. 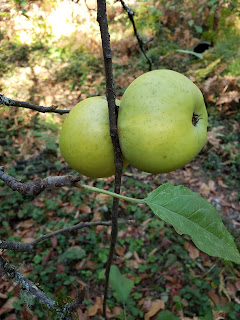 As the apples pass into memory, other crops begin. The Medlars are ripening and their harvest will begin in a week or so. The acorns are in full swing, and the Madrone berries are well started. Even our frost-smitten garden patch still produced a few very late sunflower seeds! 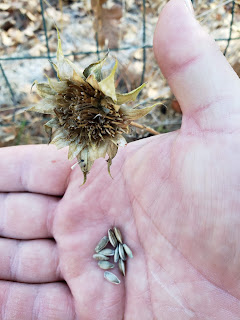 This is a drought (PG&E cut power several times during very hot, dry weather - so much for the irrigation) blighted and late seeded (early August) "Mammoth" sunflower (they are normally over a foot in diameter), yet it managed to produce its thin shelled and very tasty seeds all the same.

The Oaks are in full swing of acorn production as well. We have excellent crops of Tanoak, Canyon Oak, and Blue Oak, though acorns are not as large as last year on average. Valley Oak is producing, but we are late and the critters seem to like those acorns best... 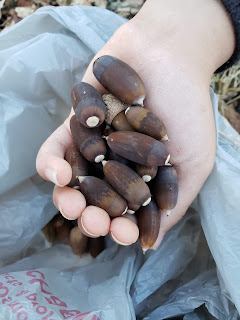 These are Blue Oak acorns, one of our favorites for culinary use. A cool Fall afternoon is a great time to hunt these gems among the leaves, and it resharpens the hunter-gatherer mind and eye in preparation for the coming Mushroom season! It is also a lot of fun. Sometimes you stumble across genuine surprises, such as Phacelia minor in full bloom in the middle of November! (This species normally flowers in February and March through June). 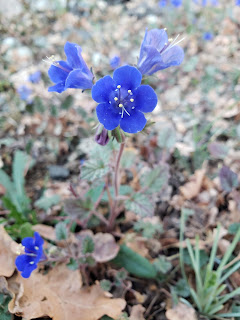 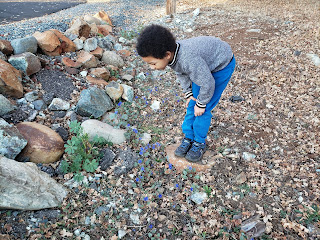 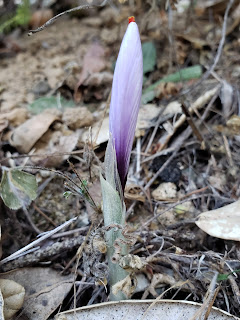 The orange tip of the stigma - the female part of the flower - is just pushing out of the tip of the opening bud of this Saffron flower. To harvest the spice, you pick the flowers and take them apart, drying just the orange-golden stigmas like tiny threads.

We have a few patches of these we planted over the past 20 years. They are autumn flowering members of the genus Crocus, with flowers pushing through the dry ground before even the leaves emerge. This type of flowering, with the flower arising before the leaves, is called hysteranthous flowering.

Saffron is native to the Middle East and parts of Greece, though it was planted widely around the Mediterranean. Even in the United Kingdom the Romans grew it, leaving place names like Saffron Walden behind.

Saffron needs a hot, dry summer and a cool, wet fall through spring. It pulls itself deeper into the ground each year, so needs protection from gophers and squirrels and other rodents that dig.

Over the years, I've grown enough Saffron to make a few rice dishes with my own saffron. It takes a lot of land to grow an ounce of the dry herb!

Our son has planted his bed of saffron now, with high hopes and last year harvested his own first saffron!
Posted by Rob Ferber at 7:37 PM No comments: