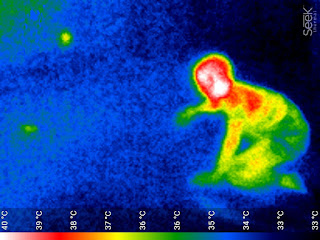 After Christmas the track is laid out and power applied. Viola! Then the questions begin: is it running too hot? Why won't it levitate? Can I leave it plugged in but off?

In the old days, experience would guide my answers.

Today, we can collect quantitative data. I have a thermographic camera that plugs into my phone which allows real time quantitative thermal imaging.

The train engine is the colored blob left of my son. The wall transformer is in the image center. Both are about 12 degrees above background.

Neither is as warm as a person...

The trains can run! 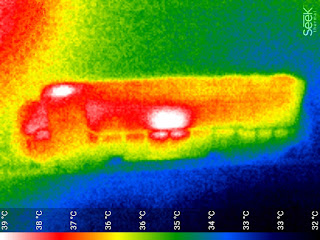 Above is a closeup of the N-Scale engine after about an hour of intermittent use - it has hot spots, nothing hotter than is safe however.
Posted by Rob Ferber at 12:44 PM No comments: 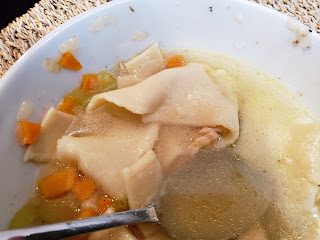 Our family has a tradition of making Chicken Noodle Soup from scratch, starting with raw chicken and making our own broth and noodles. The basic recipe is very simple:

Separate the chicken meat from the bones, skin, and other less edible portions. Put them into a large pot and cover with a few inches of water. Bring to a boil, cover, and reduce heat to maintain a simmer. Cook for at least an hour, generally we let it run overnight.

Turn off heat and allow to cool to handling temperature. Do nothing else just yet to this pot, instead start making the noodles.

In a large steel mixing bowl mix 3 cups of all-purpose flour, 1/2 teaspoon of salt, and two tablespoons of Walnut Oil (or oil of your preference). Carefully crack three eggs into a container and confirm there are no shell fragments in the eggs. Pour the eggs into the flour-salt-oil mix and begin stirring with a strong spatula. Eventually you will have a mixture of crumbly bits with too much flour. At this point start adding water about a tablespoon or less at a time - resume stirring until all the fine bits are collected but a proper dough has not yet formed. Now stop adding water! Collect all the crumbly bits and mash them into a dough ball. If the ball does not hold together, consider adding a small amount of water and trying again. Start to knead and fold the dough ball, flattening it then folding it in half on itself, then flattening it again. Do at least 20 cycles, the more the better. The dough should not be sticky at all.

Let the dough rest for 30 minutes. Flatten it into a sheet about an inch thick. Cut the dough into thin ribbons, about 1/8" thick. These can be rolled thinner with a rolling pin or a pasta machine. In a pinch, we've used washed wine bottles as rolling pins. If the dough sticks to things, dust the dough thoroughly with flour before rolling. Shake as much of the flour as is easily possible to remove from the dough before putting it into the soup, or pre-boil them in water, strain out, and put the cooked noodles into the soup.

Once flattened and rolled to the desired thickness, the noodles can be cut into whatever shapes you desire. My son made a bunch of "Christmas Noodles", mostly versions of various Bird's Nest Cup Fungi, and I took a few entire strips and did half a twist then joined the ends to construct a Mobius Strip - hence the noodle with only one side.

These need cooked in boiling water for about five minutes, though we tend to drop them directly into the soup once it has begun to boil, at least if we didn't need to flour the noodles to prevent sticking. 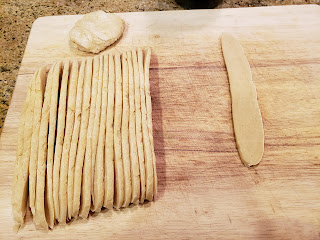 In a Second large pot (large enough for the entire batch of soup) add enough oil to just cover the bottom thinly. Dice the onion finely, and place the onion into the pot. At high heat, carmelize the onion. Remove from heat.

Place a strainer over the large pot containing the onion and pour the broth through the strainer until the pot is sufficiently full for the soup. If in doubt, add more broth. Return the onion-broth pot to the stove and heat to a boil. This is the soup pot.

Chop the chicken meat into 1/8" (3mm) thick slices and add to the soup. Add the noodles in small groups, being careful to separate them from each other before adding to the soup, once the soup has begun to boil.

Cut the carrot into thin slices and dice. Repeat with Celery. Add to the boiling soup. Season to taste. Enjoy! 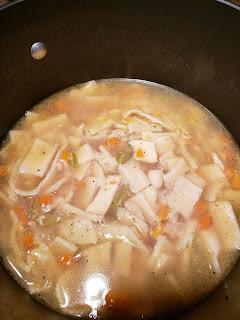 Ever want to grow food to apease an Eldritch Horror? Now you can feed the Old Ones in your life. 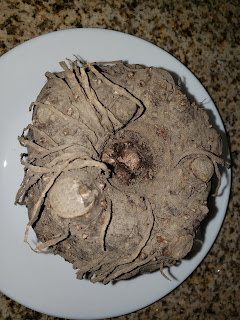 Actually, meet Amorphophallus konjac, a tuber that grows in tropical rainforests and is cultivated. As food, it is known as Konjac.

They are dormant in the Winter and must be kept dry until growth resumes in Spring.

This one is just about a pound. They get up to ten pounds, at which point they flower.... which is a 5 foot tall black calla-lily sort of thing. It is fly pollinated, so probably not florist material...

To celebrate  the longest night of the year,  we thought of Konjac (we also are repotting ours...).

Happy Yule!
Posted by Rob Ferber at 7:48 AM No comments: