Sometimes our world is stranger and more wonderful than I've found in even fiction - for example, look at Hemitomes congestum.

These plants are flowering now in our yard, near the southern limit of the range of this species. That's good, because they are lovely, and because it is the only part of the plant that ever comes above ground. They don't need more of themselves exposed to the vagaries of above-ground life, as they have no chlorophyll and, unlike the vast majority of plants, do no photosynthesis at all. 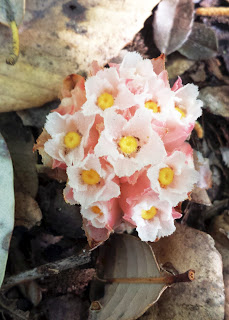 With most parasitic plants (think Mistletoe or the Paintbrushes), the parasitic plant connects directly to some other, green, host plant - they tap the vascular system by imitating a branch or a root, as far as the host is concerned. That is not how this plant works.

The roots of Hemitomes are corraloid - a very strange looking affair sort of looking like a woody upside-down cauliflower. It doesn't touch or connect directly to any other plant. Instead, it pretends to be a mushroom. It does this very well, convincing the underground mycelium (the underground and largest part of the mushroom organism)  of the mushroom to give it water, nutrients, and sugars just as if it were a growing mycelium or fruiting mushroom. It is backwards - most times fungi contrive to get nutrients from the roots of plants, but in this case (and a very few others) something went weird, and the flow turned around.

The mushrooms these plants depend on are generally pilfering nutrients from plants in the forest by connecting to their roots. This is generally called mycorrhizal symbiosis, where the fungus essentially barters simple nutrients to the plant root in exchange for lipids and sugars to feed the mushroom. In many cases, this sort of life strategy is a powerful win-win, with the plants getting minerals from a larger area than their roots can cover, and the fungi getting a stable source of food.

Some of the best of the edible mushrooms live this sort of life, including the Chanterelle and the Boletes (Porcini, Butter Boletes, etc...). Few plants have figured out the trick, though. Two others in our area will be flowering soon, and I'll say something about them later. They are wild Orchids, no less!

Dichelostemma ida-maia, the Firecracker Flower, are bulbs native to Northern California. If you are lucky, you might encounter them in flower this month along mountain roads.

These we grew from seeds, and it has been a ten year wait to see them flower (we had a problem with rodents deciding the bulbs were very tasty, which has proven to be a harder problem to solve than we expected - planting them inside wire mesh spheres has helped). They have been worth the wait! This is the last species of Dichelostemma to flower for us this season (it starts with D. capitata in February). They are a lovely way to wrap up Spring.

You can find these online as full-grown bulbs for sale, if you want them without the wait.
Posted by Rob Ferber at 2:39 PM No comments:

Sweet cherries abound this time of year - then there are the Sour Cherries, which can be deucedly difficult to locate for fresh eating, but which most people have encountered in pies or as Maraschino Cherries. 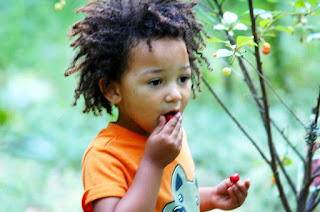 The best of the Sour Cherries also make, while a bit tart, wonderful fresh eating cherries, with the advantage of pits so small that I do not worry about our toddler choking on one. In my opinion, the best of these is a relatively new variety called Northstar. It is the first widely released new sour cherry variety in over a century (Montmorency and Morello are more common, and they are about the only other varieties that can be easily found). Further, these can be had grafted to very dwarfing roots, so that the bearing tree is barely taller than my toddler and easily picked by him. Last year, he ate them all. This year, he has been watching it and carefully inspecting the green fruits for any blush of developing color. Today, the first cherries were ripe (or close enough for me to allow him to pick them...), and we had a minor picking party at the tree. Only two cherries made it to the house for mother and sister to try.

Who knew California had a wealth of native tulips? The Mariposa Lilies and their kin are right now flowering across the state, ranging across the spectrum in colors and sizes and shapes. Please leave them alone when you find them - they can always use our respect for their simple existence in the wilds that remain.

This is one of my favorites, from the Tehachapi Mountains of Southern California: Calochortus venustus, the red form. This species ranges from white through yellow, pink, red, and even some intense purple flowered forms, but this is the one I first met and still find the loveliest of a wonderfully diverse species. They can be grown from seeds with patience and care (our seeds are here, with more species being added as we harvest the seeds over the next two months). 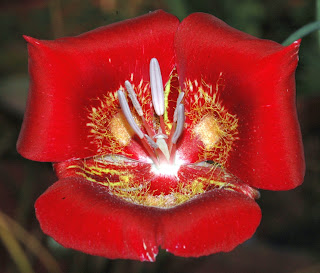 These grow to flowering in between three and five years, and are well worth the wait. These are a festive marker of Summer being nearly here when they bloom, as many plants have all ready dried up for the season in the heat of late Spring.

Posted by Rob Ferber at 1:29 PM No comments: