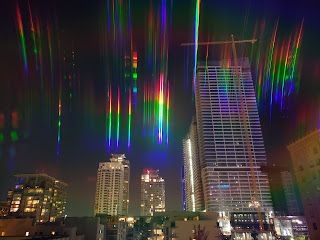 Ever look out at the city at night wondering what the technology behind the glittering lights might be? I do...

Turns out there is a simple way to find out what is making the light. This picture was taken through a 1000 lines-per-millimeter diffraction grating (the cheap kind from Rainbow Symphony that come in a 35mm slide frame). I placed it in contact with the camera case and parallel to it, then adjusted the rotation of the grating until the spectra were generally directly over the light source creating them.

This view of Los Angeles has a remarkable diversity of lighting technologies on display. One to the left of center stands out to me, as unlike most of the spectra in view (which are continuous stripes of color), this one is made from distinct spectral lines (not all colors of the rainbow are present). 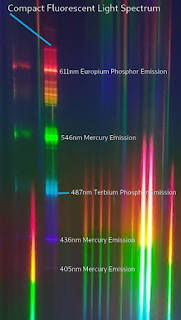 Line Spectra are like fingerprints for atoms and molecules: the light is made of just a few select colors at characteristic wavelengths. Each line relates to a very specific transition in the orbiting electron clouds of specific atoms. In many cases the complete list of elements in a sample can be teased out of a careful examination of the spectrum.

The temperature of the plasma (assuming the emissions are coming from an electrically charged hot gas, as in a mercury vapor or sodium vapor light) can also be determined by understanding how much energy is released in each transition. There is a simple relationship for the average kinetic energy of atoms moving in a gas and their temperature:

Note that R=8.314J/mole-K, N=6.022x1023 particles/mole, T is temperature in Kelvins. K is the average kinetic energy of the atoms moving in the gas, with m being the mass of a given atom, and v being the root-mean-squared velocity of the atom.

There are several good sites discussing the kinetics of gasses. NASA has a nice one where you can select your grade and the material is selected appropriate to your grade level. See https://www.grc.nasa.gov/www/k-12/airplane/kinth.html

A variant of this thinking lead to Einstein's first Nobel Prize, which is for the Photoelectric Effect (light striking a metal causes no emission of electrons if the photos are below a certain energy, while above this threshhold the energy of the electrons emitted increases with increasing photon energy).

Incidentally, this is where "Absolute Zero" comes from - at Zero degrees Kelvin, all motion stops. (there are semantics about whether spreading of wavefunctions via the Heisenberg Uncertainty Principle amounts to some form of motion, for example).

We were just looking at pretty colors, right? Turns out it is a great entry point to explore some amazing physics and how our universe works.