Last night I got to try taking pictures of Comet Wirtanen again, with assistance from my son, who mostly wanted to run the "driver's seat" controls on the telescope mounting. When I processed the photos (stacking about a dozen) he noticed the comet was not uniformly green: 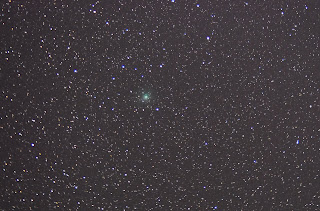 I asked my son (a kindergarten student) what he thought of the comet, and he said "two carbon atoms, they stickeded together, then got excited and glowed green, while on the bottom sunlight is just reflecting off the dust atmosphere [tail and coma]. Thank you for visiting my blog entry." 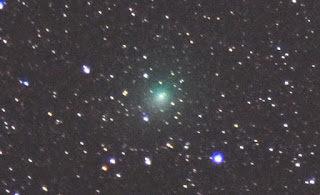 Put another way, the comet doesn't really show a tail in this photo, but the visible coma of the comet is not all made of the same stuff. Diatomic carbon molecules fluoresce green and are largely in the upper half of the comet's atmosphere in this photo.  In the bottom half, there is sunlight being reflected from dust particles (and in fact the nucleus itself) which is much whiter. This dust makes up one of the two tails a typical comet has, the dust tail that drags out behind the comet along the path of the orbit. The gas tail isn't really visible in this photo, but tends to point more or less directly away from the sun and is green in the case of Comet Wirtanen. For a better photo, look at SpaceWeather's comet photo gallery.

While the comet was approaching Earth, the tail seems to have been hiding behind the head of the comet, more or less. Now the geometry has changed rapidly as it sped past Earth, and the dust tail is coming out of hiding. This is a tiny comet that just came close enough to be a relatively easy thing to see - which leads to one of the reasons my stars are short lines instead of points - the comet is what I was tracking, and it is moving, even in the short span of time I needed to take these photos.

SpaceWeather.com is run by a public school teacher out of Bishop, California - the site maintains a collection of photos of interesting things in the sky submitted by folks around the world. This link goes to a movie of the comet moving among the background stars over roughly the same time I was taking my pictures. Comet Movie. This shows another object orbiting the sun moving against the starts as it moves away from Earth.