We have had frost, gale force winds, and some solid Winter storms. These events tell me why these three apples are almost never commercially picked at their prime  - to do so might risk loss of part of the crop. As a result, I never had these apple varieties in their full glory until growing them here. 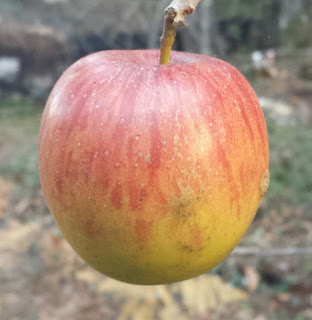 Braeburn (above) has now lost some of its tartness while becoming a richer, more aromatic, and much sweeter apple than it was in October. It is now a crunchy, juicy, sweet-tart joy to pluck from the cool evening air and bite into. In October it was a good apple. Today it is in its prime and is a great apple. This is my spouse's favorite among our Winter apples. Braeburn holds well on the tree. 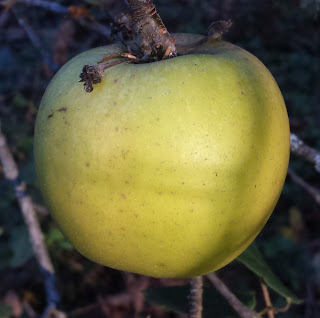 Yellow Newton Pippin is now a rich yellow green with a deep glow in the low Winter sun. This is a crunchy, juicy, sweet-tart gem that now has a balance and a depth of aroma and flavor that was not fully developed earlier in the season. This is my favorite apple of the season; I am eating a few a day at this point and using very few for the juicer (note - in October, these produced a green juice that was slow, meaning 15 minutes, to brown; while now these produce a juice that is yellow-brown to start and much sweeter than the juice they made in October). My son also, narrowly, favors this apple. 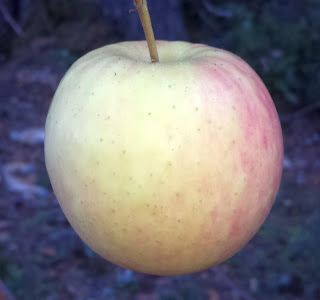 Cripps Pink, a.k.a. Pink Lady, is a wonderful apple. They are normally more intensely colored than this one - this was put in a paper bag (as were many others) to keep critters from pecking them, the downside is that they do not color as strongly as the apples left in the sun. These are now "kid candy", very popular with our few young visitors and I've even caught our older kids eating these... They are crisp with a nice "snap" when bitten into, sweeter than the other two varieties above, with fewer aromatics than Braeburn or Yellow Newton Pippin, and a mild yet delightful flavor. These also juice very well.