This was the 46th "periodic" comet discovered. In other words, it is in a stable orbit around the sun. This year it made a remarkably close - meaning several times the distance to the Moon - pass by the Earth. It is a little comet, yet even a little comet can be pretty and bright enough to see when it comes close. 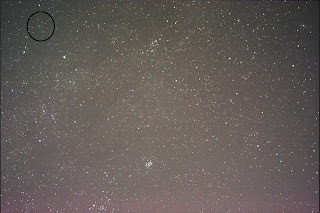 This picture is a stack of 12 photos taken literally by putting my camera on its back on the ground and taking 12 exposures of 5 seconds each, then stacking them. No fancy gear needed, in other words. The comet is circled in the upper left, it is the faint fuzzy blob. Lots of folks have taken vastly better photos - this just happens to be mine. The Pleiades are in the lower center of the photo, and the Andromeda Galaxy in the upper right.

The neat thing about these sort of close-pass comets is that you can watch them move. Not quickly enough for the naked eye, but the comet had moved significantly between sunset and the time I took this picture, near eleven pm, at least it had moved its own diameter against the stars.

When planetary distances are considered, there are relatively few chances we have to watch things other than the moon move this fast.
Posted by Rob Ferber at 11:59 PM