Why are there more lizards along trails in the late afternoon?

Recently we noticed that lizards are often much more abundant in the late afternoon actually on and along trails in the chaparral than in other areas. That brings up the question "Why?". 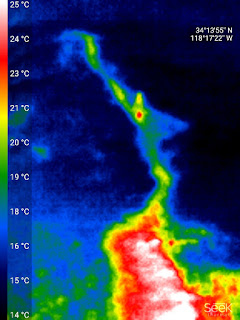 Turns out you just have to look at the trail the right way and it is obvious - though in this case, "the right way" is a literal type of camera reference - a thermographic camera. The photo above was taken with infrared light (or "IR" for short) between 7 and 14 microns in wavelength, instead of the more typical photos which use light roughly between 0.4 and 0.8 microns in wavelength.

The scene above might look more familiar in ordinary visible light (this isn't exactly the same spot, since the IR photo was taken just after sunset - it does show how the trail is flanked by vegetation and it is nearly the same spot). 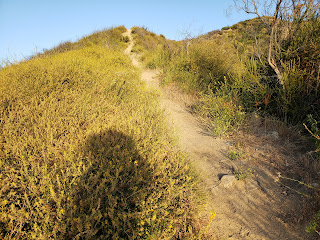 Why use such odd light? Because it is the light that we humans give off, as well as pretty much anything else that is near "body temperature". Lizards are generally "cold blooded", which means that to get to their ideal comfort temperature, they have to move into warmer or cooler spots to adjust their temperature. In the heat of the day, they are looking for cooler spots - at least when it as hot as some parts of California get in summer...

Turns out their preferred body temperature is very close to ours (a bit cooler, not much though).

The trail remains warm as the day starts to cool off in the late afternoon and long into the evening. The lizards come to soak up the heat and be more comfortable.

Wait, "the light that humans give off"???

Yes, we all emit light. Lots of it, in fact. It is light that we cannot see with our eyes, but with other sensors we have - try holding the underside of your forearm facing someone else on a cool day and see if you can "feel" the infrared they emit from a few feet away. It is subtle, and most of us can notice it once we start looking.

Planck's Law of Blackbody Radiation states that the amount of power emitted by and object effectively through thermal means (meaning atoms are vibrating and colliding, which causes the emission of photons at all wavelengths, very roughly) relates to the temperature of the object according to this relationship:

Three of the constants that define this universe are in the equation - I grabbed it from the Wikipedia page.

Astronomers, photographers, and interior decorators all know this to some degree, in the sense that a hotter star appears bluer than its cooler neighbors. "Red Dwarf" stars are cooler than our yellow sun, while Blue Giants are hotter. If you want a "warm" color of light, you go to cooler, redder equivalent filament temperatures (at least that was the case when light bulbs were actual bulbs with actual tungsten filaments...).

Let's look at what the equation above predicts for the light that our Sun gives off versus what we emit.

I had to put the green curve on a separate scale from the blue, red, and yellow curves since the power emitted by people as deep infrared light is really tiny compared to what the sun emits (the red or 5700 Kelvin curve).

The fact that we emit our own light is what makes thermal imaging possible. The slight differences between different areas of our bodies translate to significant changes in the power output by those areas. 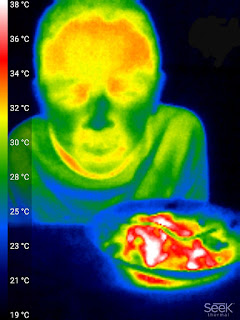 I can literally call my son the "light of my life". Of course, that applies even more to the soup he is about to enjoy.... perhaps I should avoid working in the greeting card industry...

The soup is hotter in places than anything else in the photo, even though the "white hot" areas are just about 100 degrees Fahrenheit. His forehead and neck are hotter than his shirt or hair - so they give off more light. It just happens to be light that we cannot see with our eyes.