Ever have a fistful of seeds and chaff and sticks from some random wild species and all you want is just the clean seeds? 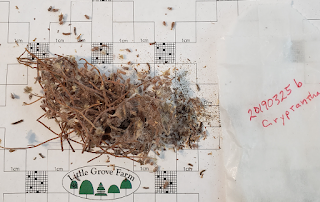 Then you need a Seed Cleaning Machine! Problem is, most of the ones you can buy were designed for specific crops, such as "grains" or corn or such. If you do get lucky and find a highly adjustable type suitable for wild seeds, they are likely the sort where there is a big tube and a screen, and in the process of cleaning the seeds you blow chaff all over the general area - and you still cannot separate seeds from heavier debris.


After building seed cleaning machines based on winnowing or fanning machine designs for the past several decades, I decided we could do better.

Here was my list of objectives:
How to accomplish this list? Applied Physics! The path a feather takes on a windy day and the path of a stone are very different. Let's make use of that observation and build a machine. 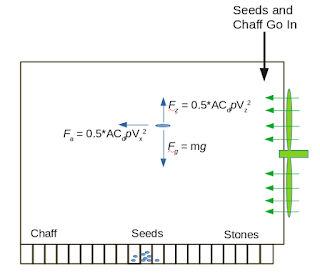 In the chart above, the three forces on the seed are drawn. They do not balance, so the seed accelerates along a path. For simplicity, here are the terms in the equations above - two equations are aerodynamic drag, and one is acceleration due to gravity:
Putting the equations above into a spreadsheet and running small time steps (0.02 second) for a 1mm x 2mm seed weighing 40mg each and for air flowing from the right at 1.0 meters per second creates this path for the falling seed: 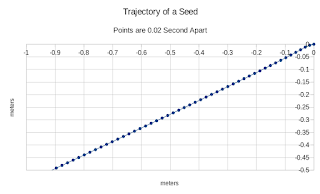 Heavier seeds fall more vertically, while lighter seeds of the same size will fall at an even shallower angle than shown.

This is all theoretical. What happens in real life?

This is a batch of seeds for Fritillaria agrestis, a wonderful plant that has become moderately rare since it liked to grow in places that are now largely farms or cities in the Central Valley, among other locations. The heavy seeds are covering a small range of bins on the right, while chaff and unfilled seed coats (bad seeds) are spread out on the left. I would call this a good separation.

This is a batch of an onion-like plant named Dichelostemma capitatum, once again with a good separation quality. The input is vertically above the rightmost cup in each case.

The machine we built to do this is basically two slabs of Foam Core Board, separated by a 2cm wide gap. A computer fan is connected to a tetrahedral duct on the right side to provide a smooth sheet of flowing air to the airgap between the slabs, and the seeds are added via a funnel on the upper right. 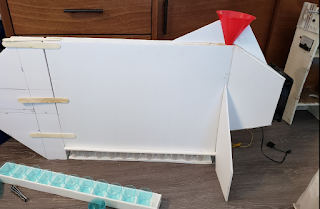 We are using the linear power supply from my oldest surviving seed cleaner on the right edge of the photo (likely topic of a later post) to control the speed of the fan, with the collector cups separated by short vertical popsicle sticks in the base of the unit. Under the device the collecting cups sit, with a fresh tray of them shown in the lower left. The structure on the left will have to be part of another post, as it feeds into our Vortex Chaff Collector.

It took an hour or two to get all this together once we thought out the design. We are making more and better variants, since this is a lot of fun - hot glue guns, cutting, soldering - all stuff that gradeschool kids can help with.