Late in 2019 my son and I bought a damaged original NexStar Celestron 5 from someone who had one that had fallen over. This was the very first of the NexStar telescopes, Celestron's first attempt to field a GoTo telescope that knew how to orient and align itself, and then how to find objects in the sky, all by itself. 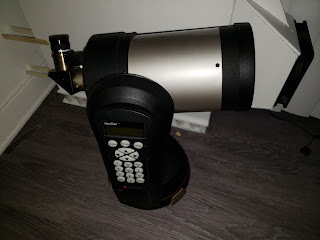 Not all that many were made before it was replaced by an improved version, the NexStar Plus, a line of telescopes that are made to this day.

This being a relatively rare machine that was rapidly replaced by Celestron with newer and better telescopes, they no longer any sort of support for the model. We were on our own to get the machine up and running.

My son recently turned seven, so this seemed like a good opportunity to show how to figure out what was wrong and to repair it. While there are integrated circuits on the main board, they are modest and there are plenty of discrete components making probing and debugging relatively tractable. 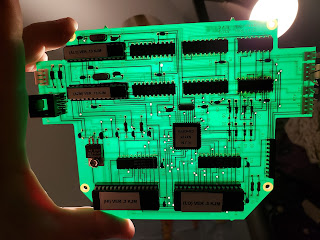 In fact, the wiring can be traced just by holding the main circuit board up to a bright light.

What were the symptoms? The telescope would power up, and immediately start slewing in Azimuth. Altitude was fine, but with or without the hand controller attached the telscope just started moving at maximum speed clockwise (when viewed from above). The hand controller was erratic as well and the case showed signs of being crushed. The screen was intact, but flickered and was unreadable. The tripod had a broken support strut, and the focuser on the tube assembly had a great deal of play - to the point of wondering if it was doing anything at all.

The tripod we dealt with temporarily with a cable tie. The problem was the spider that holds the legs in  equilateral triangle had one broken coupling where they all meet in the center. Not elegant, we will machine or 3D print something better eventually.

The focuser likewise was a fairly simple fix: the screws were loose.

The main board was the hard part. 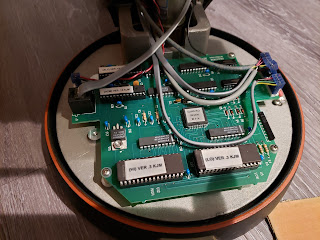 The main board had a single failed chip. It was the motor driver chip for the Azimuth motor. Finding it was accidentally easy - I happened to tap it while explaining to my son what some of the chips did (we looked the part numbers up online, I don't have this in my head...). When I tapped it, it burned my finger. This is an unsubtle clue to a problem.

That lead to grabbing the thermal camera and collecting more information. Fortunately, it was the only thermal anomaly on the board: apparently one of the motor driver H bridges had failed to being constitively on.

Using a SEEK thermal camera, this is what the board looks like after being turned on for about ten seconds: 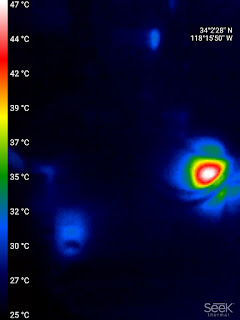 The good news: only one conspicuously hot chip. The better news? It is a chip that we could still purchase. The chip is a Texas Instruments / L293DNE that we were able to buy from Digikey (not an endorsement, just the place we found them in stock). The Celestron NexStar main board has two of these in 16-pin DIP packages. One controls the azimuth motor (turns the telescope to different points of the compas) and one controls the altitude motor (raises and lowers the tube). Our failed chip was the azimuth drive.

The first task was to desolder the chip. Since the chip was dead, the legs could be snipped off next to the chip body and the chip removed. Then the pins can be desoldered one at a time. That would have been simpler than what we did, which was a classic chip extraction. After an hour of playing with desoldering wick, we had the chip out! 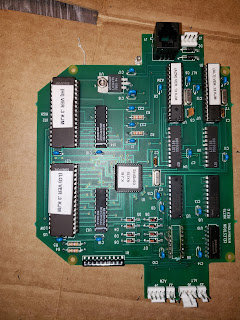 After the chip was extracted, we ran a very small drill bit through the holes to make certain they were clear (they are plated through, so do not use a bit that is even terribly close to the size of the hole or you will break circuits). We managed to cut one trace on the board as well, which we fixed with a solder bridge. 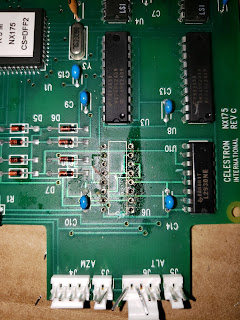 With the new chip installed, we are approaching readiness to reassemble and test the telescope! My son did all the soldering to reinstall the chip and most of the desoldering. He is proud of being able to fix his telescope. 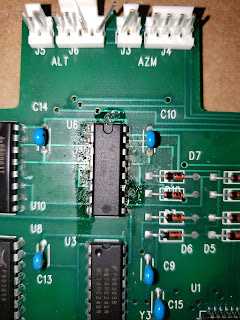 When the whole thing was assembled, the telescope works, though the hand controller is often illegible. That is our next project!
Posted by Rob Ferber at 10:17 PM