The Mariposa Lilies of Summer?

California has wild Tulips?! Sort of - the genus Calochortus is actually more closely related to Fritillaria than to the Eurasian genus Tulipa, though they definitely look something alike. 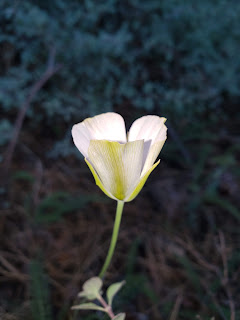 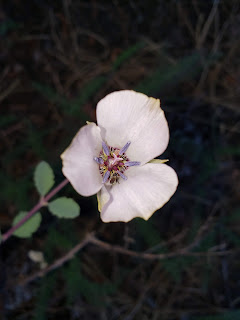 The famed Butterfly Lilies of California and Western North America are generally flowers of Spring, with a few stragglers making it into late June or early July. Even in August, however, a few of the latest blooming species can be found - you just have to like getting to altitude!

Calochortus invenustus, the entirely incorrectly named "not-lovely" Mariposa, is in flower right now at altitudes above 7000' in the Tehachapi, San Gabriel, and other local high mountains. On Sunday while driving to Los Angeles I stopped in some of the high country near the Grapevine and was delighted to find substantial numbers of these pale treasures flowering among the low bushes and rocky areas.

These grow reasonably easily from seed and flower often in their third Spring when planted early in the Fall. They require a well aerated and well drained soil, kept dry (not baked in the sun if in pots!) over the Summer, then watered again starting in early October (or at least that is how I grow them). I'll post something more detailed later, however if you want instructions now, several excellent guides to growing these gems from seed exist: the Pacific Bulb Society has one of the best here.https://www.pacificbulbsociety.org/pbswiki/index.php/HowToGrowCalochortus
Posted by Rob Ferber at 7:23 PM