Return of the Birthday Moths

My son ran to me this morning exclaiming "Daddy, daddy, there's a birthday moth on the deck!".

Almost every year, the Ceanothus Silk Moth (Hyalophora euryalus) makes an appearance on our front deck around the Vernal Equinox. The day our son was born, three showed up - when I explained this to him this year, he started calling them "Birthday Moths", which seems to have now stuck in our home. 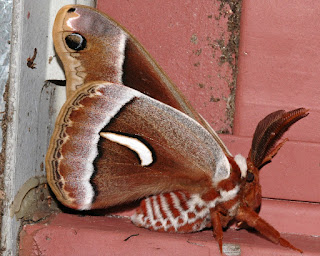 Most years, we get one or two, over a week or so. This year has been a bit of an odd duck - we've had almost a dozen, with moths showing up on the porch in February, April, and May - with the latest showing up yesterday (May 17th), by far the latest in the season we've seen them at our home.

These are enormous moths, larger than the Monarch butterfly, one of the largest Lepidopterans of California, if not the largest. They are harmless, with enormous caterpillars that eat several native plants, including the native Ceanothus species. They have become quite rare in many areas where they were once common, but do not appear to be in serious trouble as a species. We went several years without seeing any, so when they began showing up again we were delighted.

For scale, this moth is about four and a half inches face to rear of wings, with about a six inch span when open.