We grow pole beans. Due to an invasion of cutworms (which of course are not actually worms, they are caterpillars that turn into moths), we have a lot fewer plants bearing beans than we intended. However, our son is very diligent in watching, watering, and harvesting the beans when they are ripe. 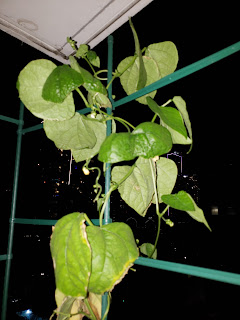 This has led to a dilemma - how to best prepare three individual string beans?

This time I didn't have something where we could just add them with the other vegetables - so I cut them to length and arranged them in a bowl in the microwave.

I gave them about 30 seconds expecting uneventful cooking. The loud sound and bright orange light that erupted almost immediately from the microwave put an early end to that exercise. 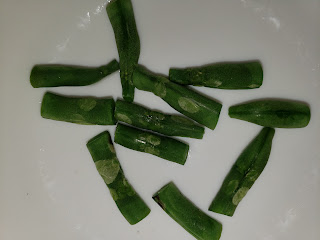 It turns out the beans had been cut into bits that were well separated - except where two had rolled back into each other. At that point, something like the grape in a microwave event developed (for a decent YouTube video go here, for an actual peer reviewed paper in the Proceedings of the National Academy of Sciences go here).

For the record, the beans were delicious. I'm suspecting that there was a bit more chemistry in the small burned areas where they were in contact than in a normal dry-braising cooking protocol, so I don't intend to make a habit of this particular method.

However, in my roughly half century, this is the first time I've cooked my food with ionized plasma as the primary thermal source... My son now wants the plant to grow even more beans so we can do this again...