Wild Snapdragons of the Chaparral

California has a famously diverse flora, including the genus containing the domestic snapdragons, the genus Antirrhinum. The genus can be found across Europe, North Africa, and North America. California's species are in full bloom in the Chaparral (the bushy vegetation you find covering the coastal mountains on their lower slopes, generally).

We found two species recently that delight us whenever we stumble across them. 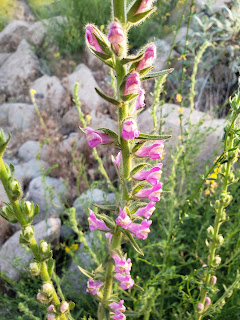 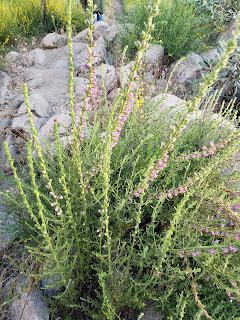 Antirrhinum multiflorum (above) is a perennial - a plant that lives for several years rather than just living within one growing season. The good news is if you find it, it will likely be there, and bigger, each year for several years. My son is always on the lookout for these, and found today's first one! These can grow to six feet tall, though normally are between two and four feet tall. The plants are sticky, so better to look than touch! 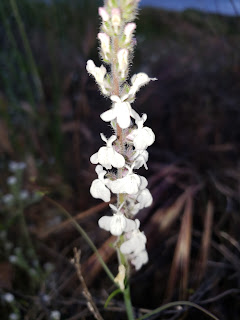 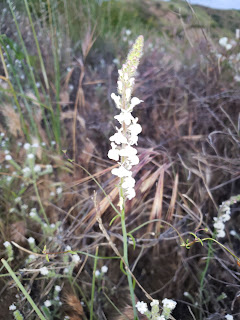 Antirrhinum coulterianum (above) in contrast is a fire-following annual, meaning it lives for a single year (actually about 6 months), sprouting, flowering, and setting seed in a span of less than a year. This plant is in a rush to grow, since Spring rains are fickle an it cannot trust the moisture will last. It doesn't grow a strong enough stem to face the wind - notice the twisting branches below the flowers? These "tortile branchlets" twist and turn through nearby plants to help keep the raceme of flowers standing tall. There is a second twist, in that this is a fire following specialist. Often, these plants are completely absent from the chaparral. They are waiting as seeds for the right conditions. Those conditions happen in the fall after a chaparral fire burns through the hills - all the soot, charcoal, and other remains of the fire trigger the seeds to germinate, after having waited for decades in the soil. You can generally find them for just a few years after a fire burns the chaparral off the hills, then they are gone again until the next fire cycle. Chaparral is a unique vegetation type evolved to burn completely several times a century.