Fall is for Preying Mantises! More succinctly, early Fall is the easiest time to see adult Stagmomantis species in the wild in California. They have finished their growth and the adults are reasonably abundant. 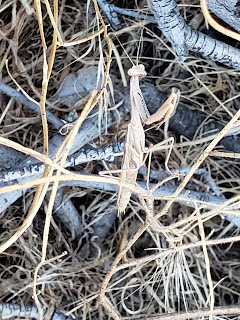 There are several species of Stagmomantis in California. I suspect this one of being a male Stagmomantis californica, though it objected to my attempts to get a closer photo... It was encountered in the Verdugo Mountains near La Crescenta within the San Fernando Valley.

To find Mantids, look for places with lots of smaller bugs. These are ambush predators - they stand still and wait for their prey to walk within striking distance of their amazing spiked front limbs. Good choices are lights at night, flowering and fruiting bushes that are attracting small insects, and anywhere they blend in. While tall grasses often harbor them, such places also have ticks - best to stay in the open and watch carefully.

Other Stagmomantis species I believe are in California include these: