After a morning of foggy forest math games, the Math Photo Challenge came to mind immediately when I found this jewel in the office garden: 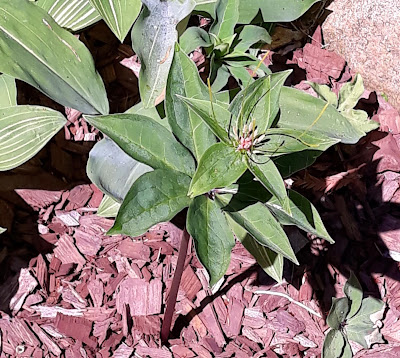 Can you believe those spindly yellow bits are flower petals?! The Wikipedia entry on Paris polyphylla does a nice job of talking about this type of plant anatomy.

As I showed Rob my attempts at taking a photo, he told me there was a surprise hiding in that garden. Another Paris, this time with light pipes on the leaves that make it shimmer and reflect light like my beloved Southern African Nerine flowers.

Zoom the photo below to see glints of blue. Best picture I could take, folks 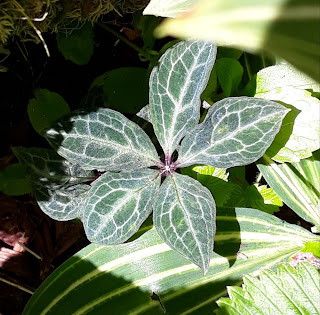 The Heronswood Nursery was a purveyor of rare and exotic plants grown from wild seed. In the early 2000s, Rob received this unknown Paris sp. and the Paris luquanensis shown above.