How much Corona Discharge should be visible on PG&E (?) Transmission Lines?

Here is a neat trick to try on a moonless night - get a modern digital camera, a tripod, and a telephoto lens. Put the camera on the tripod, set the lens to a wide aperture (such as f/3 or whatever the lowest number happens to be for the lens you have), set the camera to its highest ISO setting, and take a 15 second or so exposure focused on the power line or the insulators supporting it on towers. 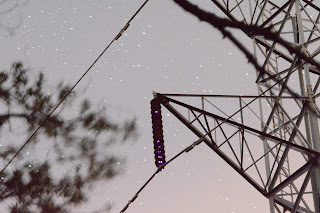 Look at the insulator - there are glowing purple blobs! This is on a 220-287 thousand volt transmission line near my home. I was trying to photograph the bioluminescence of Omphalotus mushrooms, but they appeared to not be in the mood, so I was looking for other things that might be interesting. I had seen a photo of power lines where the wires were all glowing purple, and thought that was what I would get from this method. Instead, it looks to me like the insulator is having a problem.

The purple blobs are ionized gas, in this case a form of plasma called "Corona Discharge". I cannot seem to find any information on how much should be visible on insulators, though what I have found would indicate that "very little" is expected on this type of insulating support.

Any time you are near high voltage wires and hear the crackling, buzzing sound typical of power lines, corona discharge is usually part of the sound generation. I never bothered looking to see where it was specifically being generated before, and was surprised that essentially the only stuff I could see was on the supporting insulators.

Corona discharge, in addition to eventually leading to the failure of insulators (hmm - I recall I live in PG&E territory - wonder if that's relevant), is the way power lines make ground level ozone and nitrogen oxides, neither of which are good for people.

It goes to show, keep your eyes open and you can see the unexpected in ordinary places!
Posted by Rob Ferber at 6:06 PM