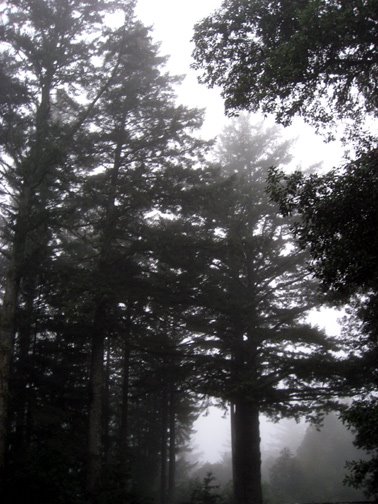 I woke up this morning to a beautiful interplay of trees and fog. We are in the middle of a rain storm this weekend, bringing desperately needed rain to the California watershed. These days, although we have well-water from an aquifer shared with only 2 other families, we take water preservation and conservation very seriously.

As you can see from the photo (at right), we have fog and rain on this mountain. The trees are of the type which capture airborne moisture and turn it into fog drip and we typically receive a respectable number of drenching storms between November 1 and mid-April. 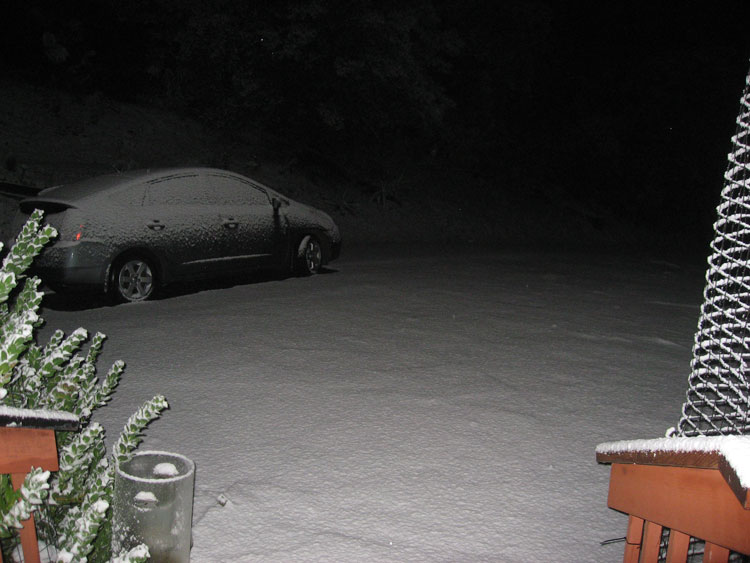 The weather pattern has been changing, becoming less predictable, and the climate seems to have fallen into a rhythm typical of earlier decades with foggy, cold summers and snowy winters (Photo left was taken 12/16/2008). This winter has been troubling due to a delay in any appreciable precipitation until the end of January. Although we intend to dry farm as much as possible, the truth is that even 3 weeks of typical 100+ degree summer weather requires some kind of irrigation. As we increase the number and variety of our plantings and start up greenhouse operations, we feel it would be foolish not to increase the charge of water to our aquifer. We are reaching back to a very low tech technology based on manipulating the land: swales.

Swales are sculpted from the land, depressions where rain water can collect and then slowly be absorbed by the ground. The complementary structure to a swale is a berm, a raised lip of land around the swale that keeps the water exactly where desired. The only tool you need to construct a swale is a shovel, although large amounts of land are better worked using a backhoe. We have 3 - 5 acres (out of a forested 10) that we'll be working swales on. If you want to construct a swale, check if it is an unpermitted activity in your county. Building swales does not require a permit in San Mateo County.

An alternative to swales would be flat land that has built up a thick duff layer. Alongside our steep driveway, we have encouraged the duff to such an extent that water uphill will not show up downhill, being completely held and absorbed by the soil and duff. I don't know the word for this technique.

Link:
Desert Water Catchment Strategies, including Swales
Posted by Linda Maepa at 9:03 AM